Founded in 2451, the Warpfire Wanderers realized they were consistently playing second fiddle to the Skavenblight Scramblers. Sales and attendance were down incredibly low until a scandal, in 2477, uncovering Blitzer Rattagat Bruxt's insanely expensive warpstone addiction was blown open by Spike! Magazine. Team owner Rittzo Norvejik attempted to cover up the scandal but then embraced it after sales and attendance started to pick up. Soon, he was paying half of each player's salary in warpstone, causing new antics and shenanigans fueled by addictions to the glowing green rocks[1].

By 2481, the warpstone abuse had led to multiple mutations, hideousness, and benefits for the Wanderers. The Wanderers of the 2481/82 season are still considered the greatest team the franchise ever put on the pitch. Unfortunately, the warpstone took its toll on the team and by the time the NAF collapsed in 2488/89, the older players were no longer fit to play[1].

Currently, there are no specific models for the Warpfire Wanderers. 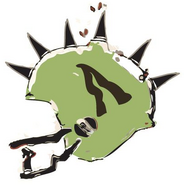