Green and White with flames

Side profile of a winged helmet Valkyrie

The Vynheim fishing industry, although lucrative in the spring and summer months, virtually shuts down during the long winters due to frozen conditions and dangerous ice floes. As such, boredom finds itself very quickly with the fishermen, and in order to combat that malaise, many form small, informal Blood Bowl clubs to pass the time. One such club, the Vynheim Valkyries, was formed in 2442, and it soon became apparent they were the toughest club in the region. By 2443, the Valkyries became a professional club when Skalagrimm & Holst Associates financially backed the team as owners[1].

2463 - Present: Rising and Staying in the Ranks

The Valkyries saw a modicum of success but really entered as a force to be reckoned with in 2463, after they won the NFC Championship, and then went on to win Blood Bowl Cup (III). In the final against the Reikland Reavers, the underdog Valkyries shocked the Blood Bowl world with a fairly easy win in Longship Stadium in Vynheim. Although critics at the time leaned more on the Reavers' lack of preparation for the cold weather (wearing flat-soled shoes and short sleeves) as well as the icy conditions of the surface pack-ice of the pitch, fans have stated that the Valkyries would have dominated either way[1].

Since 2475, the Valkyries have gone through a rocky road of wins and losses. However, in 2487, they again won the NFC Championship and were named Orcidas Team of the Year[1].

As of yet, no playable star players have come from the rosters of the Vynheim Valkyries.

As of yet, no rosters have been released of the Vynheim Valkyries. 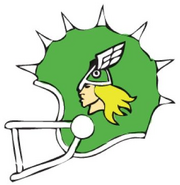