Side Profile of Snake with Goblin Head

After several years of trying to come to any sort of organization or agreement between Goblins and Skaven, the Underworld Creepers are finally formed[1].

The Creepers received many defeats and were close to disbanding until Coach Lance Fleshbarb came to wrangle the team together. His major strategy of just letting the players decide what they should do. Assassinations and and organization problems decrease as a result[1].

In 2484, the Creepers upset the Blood Bowl world by winning the Chaos Cup. After the win, they get their team lineups ratified by the NAF, which was finally found in an obscure passage of the Sacred Law of Nuffle. Along with new financial sponsorships thanks to their Chaos Cup title and official status, the Creepers sacrifice their head coach, Fleshbarb, in celebration[1].

As of yet, no playable star players have come from the rosters of the Underworld Creepers. 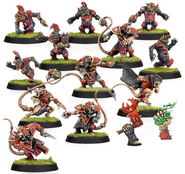 Underworld Creepers Team, 2020
Add a photo to this gallery 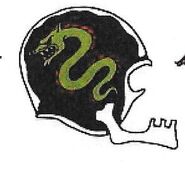 Underworld Creepers, art by Pete Knifton, 1989
Add a photo to this gallery

Retrieved from "https://blood-bowl.fandom.com/wiki/Underworld_Creepers?oldid=2953"
Community content is available under CC-BY-SA unless otherwise noted.