As a rookie, young Ugroth Bolgrot wasn't a bad player. Had he applied himself, he could have had a successful career in his own right. Sadly, Ugroth didn't see the point in working hard. Reasoning that the beloved Troll player, Ripper Bolgrot, had fame enough to go around, Ugroth decided he'd just help himself to some of that and in 2481, as the chainsaw craze began to take off, Ugroth saw an opportunity. He reasoned that by wielding a chainsaw on the pitch and calling himself 'Ripper' he could cash in on the real Ripper's notoriety.

The real Ripper was not happy and appealed to the NAF over the unauthorised use of his name. This led to a lengthy legal battle which left Ugroth with a warehouse full of merchandise he couldn't shift. Ugroth famously attacked Ripper, hoping to settle the affair out of court, as it were. Ripper soon recovered but Ugroth lost the legal battle and was given a lifetime ban for his very public display of idiocy.

Ugroth's ban was lifted by the RARG in 2498, allowing him and his chainsaw to return to the pitch.

The legal battle with Ripper, and the subsequent attack & ban, has led to a blood feud between Ugroth and Ripper. Whether the Orc has learned any lessons from his enforced absense remains to be seen, but given that he still owns several tonnes of 'Ripper' merchandise in a lock-up in Talabecland, it seems unlikely![1]. 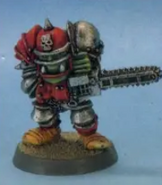 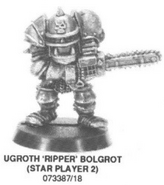