The Middenheim Marauders initially started as a mixed race team, beginning with the Half-Orc Team Captain, Uthar Hagg[1]. The Marauders always showed signs of greatness, especially in the ultra-violent excesses of Uthar, but faced strict competition from the Reavers and the Gouged Eye. Long were they a mainstay of the NAF and a permanent fixture of the AFC. The team had enjoyed great success in its heyday winning the Blood Bowl Championship title in 2465, Sadly, in the years after this success, the Marauders seemed to struggle - the team made the final three more times but always seems to lack the finesse required to repeat past glory.

Over time, talented players were lured away to rival outfits, while the wages bill seemed to soar ever higher. Within a few years, the team was in huge debt and, when the NAF collapsed, creditors were quick to call in debts owed, reasoning that the death of the NAF signalled the decline of the sport. When the Marauders were forced to sell their home stadium, an unexpected saviour came forward. The Middenheim Maulers, a long time rival from the minor leagues, approached them as buyers on the condition that the two teams merge. With few options available, the Marauders accepted and a new Old World Alliance team was born[2]. 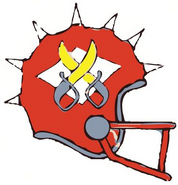