Ripper Bolgrot is a Troll blocker and former Team Captain of Deaths Heads. Bolgrot is the recipient of the most awards from Trollslayer Monthly's Most Hated Award at five awards. He currently is a free agent[1].

Ripper Bolgrot was recruited by the Deaths Heads' Orc team after being spotted in the swamps near his lair, hurling large rocks at distant fishermen with impressive accuracy. In 2461, his professional career took off due to a mysterious experiment augmenting his intelligence and is soon promoted to Team Captain. Bolgrot left Deaths Heads to become a free agent in 2478[1].

In 2461, Bolgrot was sent by the Deaths Heads' coach, Spleenstompa, to be experimented on by a back-alley alchemist. The greatest result was the exponential increase of his intelligence. Bolgrot has used this intelligence in investments and portfolios to help cushion his retirement. Bolgrot also won a landmark legal battle against Ugroth Bolgrot, who shared his name with the troll blocker until the orc was told to remove "Ripper" from his name. This caused a blood feud between the two players.

This quickly escalated where Ugroth Bolgrot attacked Ripper Bolgrot after a match, decapitating him with his chainsaw in an act of cold-blooded revenge. Fortunately, thanks to the inherent regenerative abilities of trolls, this was a mild inconvenience to Ripper at best and Ugroth was given a lifetime ban from Blood Bowl. The ban was due to Wasting Violent Behaviour outside of Play.[1]. 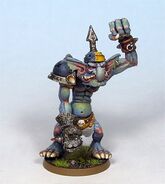