Golden Griffin, previously Skull with a blade in teeth

The Altdorf Acolytes are formed in 2389 by a business consortium in association with the people of Altdorf, making their home field at Griswell Memorial Stadium. This was achieved because of a vacant franchise spot came up in the former Oldlands Conference. DD Griswell Sr, the original owner, bought and practiced the old time art of poaching talent from other teams. Combined with financial astuteness, and headed by Coach johann Weisshaupt, their first season ended with a fourth place spot in the Whiteskull Challenge Cup (now Chaos Cup)[1].

During a storm in 2396, Griswell Memorial Stadium collapsed, due to cost-cutting schemes by the firm who built it, as well as alleged paybacks. The team changes its name to the Reikland Reavers and makes its new home in the Altdorf Oldbowl. The same year, the Reavers get their first Chaos Cup win by defeating the Wuppertal Wotans in the final[1].

In 2399, the Reikland Reavers and Dwarf Giants make Blood Bowl history when it is discovered that both sides or using its own versions of the rules. Full scale war is narrowly diverted when NAF officials step in and the game is abandoned at 17-4. This would lead to an official set of rules for all teams a decade later in 2409. The Reikland Reavers would go on to win seven consecutive Chaos Cup Championships from 2399-2405[1].

By 2410, the Reikland Reavers have solidified their place as a powerhouse Blood Bowl team. Unfortunately, DD Griswell, Sr, dies and leaves the team to his son, DD Griswell, Jr[1].

Switching to Head Coach Blind Willy Muller, with rumors that he only achieved this position through blackmailing DD Griswell, Jr, over claims of misconduct with the Reavettes, the Reavers' cheerleading squad, the team seems to still do well. Although they do manage strong results, including a couple more Chaos Cup Championships, the style of play and dominating field presence is no longer recognizable. By 2432, the Reavers, without strong leadership, enter a fourteen year slump and begin their decline to their worst placings ever. During this year, eleven members of the team are infected with Nurgle's Rot resulting in the transfer of eight players to the Subterranean Slimeballs. Under this decimation, DD Griswell, Jr, is replaced by his son, JJ Griswell, Sr[1].

JJ Griswell, Jr, takes over from his father, JJ Griswell, Sr, after the father is killed standing to close to the sidelines during an Asgard Ravens match. Once established, JJ Griswell, Jr, wastes no time in finding a new head coach, Helmut Zwimmer. Coach ZWimmer institutes his "New Order" of training, preparation, and recruitment. This style of management of acquisition and foundation building will lead to the cultivation of some of today's biggest stars, including Mighty Zug and Griff Oberwald[1].

In 2485, the Reikland Reavers win their third Blood Bowl Championship (Blood Bowl XXIV) against the Darkside Cowboys. Stepping up to replace Wolfram von Beck, who as fatally injured in the first ninety seconds, Orlak Sturmdrang leads the team to victory alongside Mighty Zug[1].

Due to the stress of selling his likeness, sports promotions, and running the team, Orlak Sturmdrang retires, allowing his half-cousin Griff Oberwald, who started with the Reavers in 2483, to take over as team captain in 2487. The same year, Oberwald leads the Reavers to their fourth Blood Bowl Championship. After the collapse of the NAF, the Reikland Reavers make it through the crisis unscathed thanks to the astute financial planning of JJ Griswell, Jr[2]. 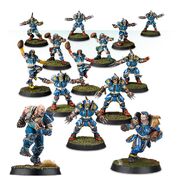 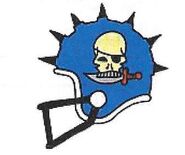