Front profile of Orc Head within a circle

The Severed Heads started their squad in 2435, after seeing the success of the Gouged Eye. Once a meeting had taken place, the Severed Heads formerly created their team and became owners. They would begin to develop tactics by studying what their fellow orc team, the Gouged Eye, had to learn the hard way- make a well-rounded rushing and passing team[1].

In 2459, the Severed Heads found themselves in a final game against the Schaffen Stallions after years of hard work. During the game, the Stallions would defeat the Raiders 3-0 in seven minutes. This action brought some inquiries and investigations. The authorities found that the Stallions had mindwiped the entire Raiders squad when they lined up for kick-off due to the Stallions' coach and his sorcery. Although the Stallions would be disbanded and disbarred, the result still stands[1].

For the next decade, the Severed Heads rebuilt their team and by 2469, would not only win the NFC championship, but meet the Middenheim Marauders in Blood Bowl IX. The Raiders would go on to win the championship, thanks in part to the Orc of the Match, Grishnak Goblin-Throttler, who would score two touchdowns and three fatalities[1].

In the 2486-2487 season, the severed Heads found themselves in financial trouble, thanks to corrupt dealing by tribal chieftains and faulty land speculation. They declare bankruptcy but the team itself will be saved when King Ironclaw of Orcland purchases the team and moves them to Orcland. King Ironclaw hires Ogre ex-torturer Cruel-Eye to help get the team ready for strong competition[1].

No star players have been released from the Orcland Raiders as of yet. 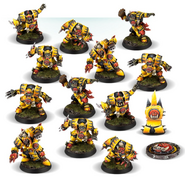 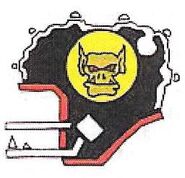