The Oldheim Ogres are a team known for their ferociousness as well as their forgetfulness. Many teams have been beaten by this team and eaten by this team. Therefore, many teams either never play them because of their reputation, or the Ogres get lost trying to find the game (should they remember they had one)[1].

The famous Half-Orc Joachim Goadmalice trained so hard he caused more casualties in practice than the team had suffered in their ten previous games. Because of his amazingly brutal talent, the Oldheim Ogres renamed their stadium Goadmalice Park, especially since that is where most of him is buried[2].

As of yet, no playable star players have come from the rosters of the Oldheim Ogres.

As of yet, no rosters have been released of the Oldheim Ogres. 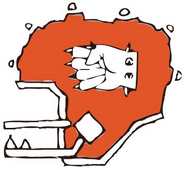