Ogres are large, humanoid creatures roughly ten feet tall and can be twice as large as a Human. They are naturally resilient, dim-witted, and prone to violence of all kind which makes them natural Blood Bowl players. It isn't far fetched to say the two things they value most is fighting and eating, and so they have played Blood Bowl since its inception. In the fledgling years of Blood Bowl, Ogres played on many teams, however, they currently are more regulated and so play on Human, Chaos Renegades, and their own Ogre teams.

Most Ogres have formed teams or have been recruited from various places around the Old World, although their highest concentration of habitation are the Mountains of Mourn. No one knows quite where Ogres originated and since it is rare an Ogre picks up a book without eating it, let alone writing one, it may never be known.

The following Ogres have had their names recorded for various deeds- noble or ignoble! Out of all players, regardless of race, Morg 'N Thorg is considered one of the greatest of all time and he hasn't even retired. Another Ogre anomaly in the sense that people can readily understand him, while enjoying his running commentary is Bob Bifford, one half of the most famous announcers of Blood Bowl, along with the Vampire, Jim Johnson. The "*" denotes a current playable character as of 2018.

These are the models for generic Ogres made by Games Workshop. 1st and 2nd Edition figures courtesy of http://www.blood-bowl-miniatures.de. 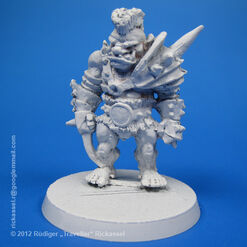 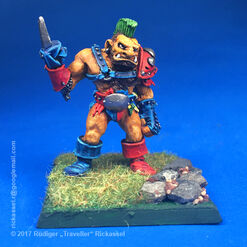 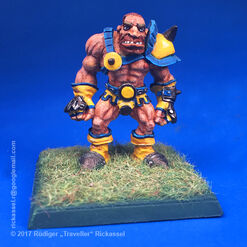 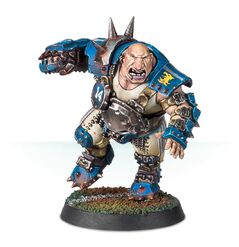