In 2402, an outbreak of Nurgle's Rot becomes an omen for the start of the Nurgle's Rotters which will be built from the survivors, who serve their new owner, Nurgle. Soon after, the NAF quickly enforces a strict quarantine of the team during, before, and after each match. The Rotters' successes quickly become apparent to other teams when players of the opposition contract Nurgle's Rot and try out for the diseased team[1].

Blood Bowl Championship VIII in 2468, would see the Rotters victorious against the more favored Naggaroth Nightwings. During an investigation, it was found that the Nightwings' lodging was an old Nurgle temple. Several players were infected with Nurgle's Rot, so only six Nightwings players were able to take the field[1].

Nurgle's Rotters would again take the field in Blood Bowl Championship XX in 2480, against the Elfheim Eagles. Amid another controversy, this time not in the Rotters' favor, the Eagles would when despite alleged use of high magic[1].

2488 - Present: Collapse and Plagues of Problems

After the collapse of the NAF, the Rotters fare very poorly in keeping their numbers up for a strong roster. At the end of 2488, the Rotters agreed to play the Arctic Cragspiders, but would be lost in transit due to the choppy waters of the Sea of Claws and hazardous ice floes[1].

A year or so later, one of the frozen bodies of the 2488 team is picked up by a fishing vessel and taken aboard. After defrosting, the crew is infested with Nurgle's Rot, including turning the ship's cat, Tiddles, into a Rotspawn. Rebuilding of the diseased team is still underway[1]. 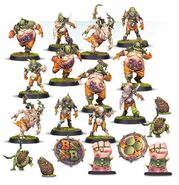 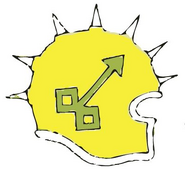