"I'm good 'cuz I've played for every team in the league, 'cept for the ones I haven't." - Morg 'N Thorg, after being asked what made him such a stellar player

Morg 'N Thorg, also known as Morg'th N'Hthrog, or "The Ballista", was an Ogre and Team Captain on the Chaos All-Stars. He has led the All-Stars to two Chaos Cup wins and was named NFC Player of the year in 2485. Morg 'N Thorg also is the only player to be elected to the Hall of Fame without retiring[1]. Currently, Morg is a freebooter and offers his services to all teams except Khemri, Necromantic, and Undead teams[2].

Club historians do not exactly know how Morg 'N Thorg came to be on the team. A persistent legend is that he simply walked into a practice session and signed himself up in 2469. Thanks to his massive bulk and bashy play-style, Morg became captain of the Chaos All-Stars in 2475[2]. Thanks to this, Morg 'N Thorg has became extremely popular with fans across the world[1].

In 2486, Ramtut III, star Mummy for the Champions of Death, admitted to a scheme to specifically kill Morg 'N Thorg during a game against the Chaos All-Stars. This led to Morg to eschew any contract playing for any Undead, Necromantic, or Khemri team[3].

Following the collapse of the NAF, Morg decided to become a Freebooter, and the most expensive one to date[2].

Although on the field, Morg 'N Thorg is considered a terror, off the field, he is a different Ogre, likened to that of a gentle giant and a hit with children. He starred in an award winning series about road safety adverts that have cut roadside accidents by more than 25%. He also has the distinction of selling more soft toilet paper than anyone else in history[1]. 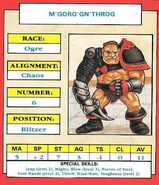 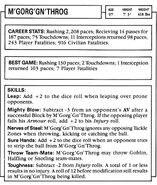 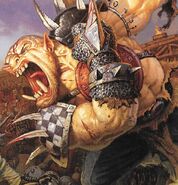 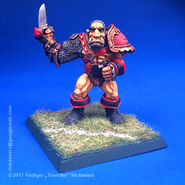 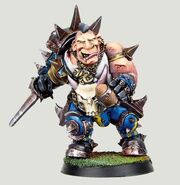