Karla von Kill, is a free agent and blitzer who previously played for the Hochstadt Hellfires and the Marauders. She was the recipient of the Blood Bowl Players Medal in 2492 for Blood Bowl XXXII, one of the few players to receive this medal while being on the losing team[1]. Currently, Von Kill is a free agent who lends her skills to Amazon, Halfling, Human, Norse, and Old World Alliance teams[2].

Karla von Kill started as a blitzer for the Hochstadt Hellfires in 2481. After several seasons and serious injuries during a brutal match in 2487, Von Kill joined the Marauders and competed in Blood Bowl XXXII, losing to the Reikland Reavers[1]. Staying with the Marauders through their merger with the Middeheim Maulers, Karla proved influential in a rematch with the Reavers in Blood Bowl XXXIII, bringing down the Mighty Zug with an elbow jab that made the crowd wince in the final moments of the game, securing the win for the Maulers and securing her place in the Hall of Fame[2].

Karla von Kill grew up on a rural pig farm and learned hard work and perseverance from her family. After watching a Blood Bowl game at a local stadium, she signed on with the Hochstadt Hellfires as a team assistant until making her way on the team. In 2486, Von Kill received severe injuries after a clash with a minotaur and was told by apothecaries she would never play again without magical assistance. After training and adhering to a strict diet and fitness regimen, Von Kill was recruited to the Marauders[1]. 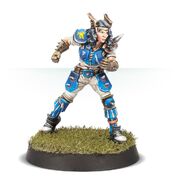