Hakflem Skuttlespike is a mutated, Skaven Gutter Runner, who debuted for the Skavenblight Scramblers. Currently a free agent, Skuttlespike lends his services for Skaven and Underwold Denizens teams[1].

A creation of Clan Rigens, Skuttlespike has been known to be antagonistic to any Skaven player that looks as though they could rival him in violence and popularity[2]. 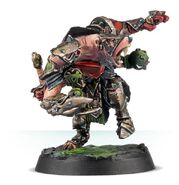