Grim Ironjaw began his career as a Troll Slayer with the Black Mountain Blades for one season in the Thunder Valley League, a league rife with Orcs. At the end of the season, Ironjaw moved to other teams, including the Dwarf Giants and the Dwarf Warhammerers[1].

Troll Slayers are players who have committed such shameful acts that the only way they may regain their honor is to die gloriously in Blood Bowl. Currently, no one knows exactly what act shamed Ironjaw into joining the Slayer Cult[1]. 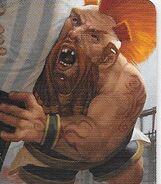 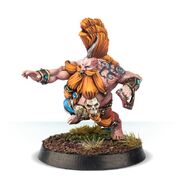