Griff Oberwald is the team captain and star blitzer of the Bögenhafen Barons. Oberwald is easily the most recognizable face for Human teams, especially considering his accolades and sponsorships with multiple companies. He helped to gain the Reikland Reavers three Blood Bowl Championships and four AFC championship titles.

When Griff Oberwald first played for the Reikland Reavers, it was recorded that head coach, Helmut Zwimmer, said, "Zat boy is almost above average.[1]"

First coming to the attention of the Reavers' fans in 2483, after making a tackle play resulting in three ears and a nose from the opposition caused a two-game suspension, Oberwald garnered a first team position due to hard work and training[1].

Alongside his half-cousin, Orlak Sturmdrang, Oberwald earned the Best Newcomer Medal in his second season with the Reavers. The award was rightly given, considering he scored the winning touchdown versus the Darkside Cowboys in Blood Bowl XXV, helping the Reavers to gain their third Blood Bowl Cup[1].

Captain Sturmdrang stepped down as team captain and in the second match of the 2487-2488 season, Oberwald was promoted. In the same year, Oberwald led the Reavers to their fourth Blood Bowl Cup, and received the AFC Player of the Year award[1].

However, following the Reavers' victory at the 2499 Blood Bowl, Griff shocked the Old World when he refused to sign a new contract with his boyhood team. Instead, Griff joined the relatively new Bögenhafen Barons in an incredibly lucrative contract that made him one of the best payed players in the game. Though it is said that this move was due to Griff beginning to feel his age and he wanted to wind down his career, Griff has since proved his doubters wrong; guiding the Barons to the XL Blood Bowl and into the annals of Blood Bowl history[2].

Born in Streissen, Averland, Griff Oberwald decided on a Blood Bowl career early in his life[1]. 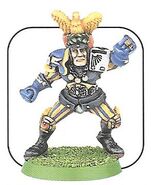 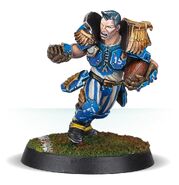 "Zat boy is almost above average!" -Helmut Zwimmer, head coach for the Reikland Reavers, on seeing him play for the first time

"Phew! What a scorer!" -Middenheim Mirror

"The greatest single gift to our profession since Morg 'N Thorg first bit a goblin's head off in the Chaos Cup!" -Undertaker's Gazette