Having followed the laws of Nuffle for a long time, the Illuminated Seers of the Sacred Orb rebrand themselves to become the Dwarf Giants. Retired player turned Head Coach, Varak Varaksson, sets new standards for recruitment, tactics, and training, bringing the Giants into Blood Bowl on a more even keel. They win their first NFC Championship in 2399[1].

Unfortunately for the Giants, in 2400, the progress made in developing the team came to an end when Orc and Goblin armies, led by Argvak Pentel, invaded Dwarven realms. The underground war lasted thirty-six years, resulting in the death of many Dwarf Giants, including Coach Varaksson[1].

2436 - Present: Rising and Staying in the Ranks

Although the war was over, the Dwarf Giants needed to re-institute their regimen and regain their footing. Hiring Coach Farakhan Karrag to replace the heroic Varaksson, the Giants were able to capture their second NFC Championship title in 2438. Throughout the subsequent years, the Dwarf Giants win five more NFC titles (holding the record for most NFC titles) as well as two Blood Bowl Championships (II and XXIV). Due to these successes, the Giants become one of the top teams in Blood Bowl[1].

Coach Gudrun Wolfric joined the team in 2488, and led by new captain, Grimwold "The Helmsmasher" Grimmbreath, the Giants have gained new awards and records for fatalities and touchdowns in various games[1]. 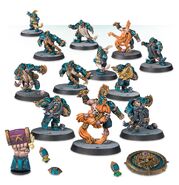 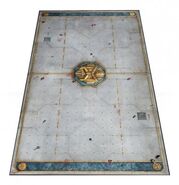 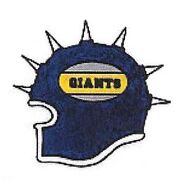