Mysteries abound with the Darkside Cowboys and their origins. No one knows exactly when the Darkside Cowboys first banded together and established themselves as a team. What is known is that in 2422, the surface world of Blood Bowl was introduced to them when they played a friendly match with the Halfling team, the Pinkfoot Panthers. To this day, no one knows whatever became of the Panthers[1].

When the Cowboys applied to join the NFC, several teams threaten to boycott the league, simply because no one knew anything about them, aside from their shady style of play and several deaths on the field bearing the marks of assassins' blades. Once they were shone in a more public light, the fans enjoyed many games the Cowboys would play in, especially one odd custom of using trussed-up Trogolodytes as balls[1].

The first Blood Bowl Championship was played in 2461, between the Darkside Cowboys and the Chaos All-Stars. It is said that the only reason the Cowboys pulled off the victory was because they incorporated illegal magic into turning most of the All-Stars scrimmage line into slugs. Unfortunately, for the All-Stars, almost no one noticed[1].

The Darkside Cowboys would achieve various successes and losses throughout the next years, but in 2472, a game between them and the Kishargo Werebears would bear the record of two teams playing the longest recorded game. The game itself ended in a tie, 2-2, and saw the slaughter of both teams over the course of 19 days, as the NAF had not instituted a time limit[2].

Once the Cowboys rebuilt their team, with Jeremiah Kool as the new captain, the Cowboys would again arrive to Blood Bowl XXI, in 2473, and gain glory with their final. In the game, Jeremiah Kool set a passing record that is still unbeaten. Kool would lead the team to two more NFC Championships before his retirement in 2487.

In 2479, the Cowboys were the first team to use illegal magic, which is to say, they used small, portable spells developed in the Underearth University research labs to be carried by individual players on the pitch. Previous spellcasting was limited to subtle and sneaky forms of magic: sleep spells on blockers, plagues of rats on the opposition's bench, et cetera. Now, this magic was used on specific players and could cause severe damage: lightning bolts or zaps of energy disintegrating the player where they stood. Almost immediately, the spell usage was banned by the NAF, but the Cowboys and other teams have utilized various forms of spells and charms to give themselves an advantage[3].

With the departure of Jeremiah Kool, the Cowboys placed blitzer, Hubris Rakarth in the captaincy position. As of the current year, Rakarth is considered one of the best in the game and continues to push the Cowboys to more glory. In fact, Rakarth was able to lead the Cowboys to the last organized Blood Bowl Championship in 2489 (XXIX) against the Reikland Reavers. Unfortunately, the game was not finished due to the entire Cowboys' Cheerleading sqaud absconding the NAF treasury with commissioner Nikk Three-Horn, plummeting the NAF into chaos[4].

"Have you thought / How bad luck / Always Comes in threes? / First your face / Then your arms / Whoops! There go your knees!" -Darkside Cowboys Cheerleaders (The Shadows) Chant 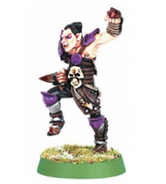 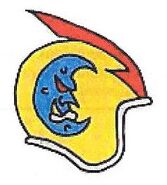