Around 2425, Tomolandry the Undying, master necromancer, discovered he enjoyed Blood Bowl and decided on creating a team. Instead of normal recruitment practices, Tomolandry used his necromancy skills towards raising dead players and having them join the team[1].

Nearly a decade later, Tomolandry was able to field a viable team, and in 2439, the Champions of Death have reasonable success, especially on the financial side, as Tomolandry had no wages or benefits to pay his players[1].

The Champions of Death enter professional Blood Bowl by joining the AFC in 2449, after a decade in the minors. However, accusations over the legal precedence of raising former players from other teams goes to the ruling board, the NAF. The final straw occurred in 2451, when Tomolandry was accused by the Dwarf Giants of stealing one of their dead blockers, Skrull Halfheight. The NAF ruled in favor of Tomolandry's practice as there was nothing stated in the Law of Nuffle about how long a player's contract lasts. Most teams then add by-lines in contracts that a player is team property including after death[1].

After the collapse of the NAF, the Champions struggle after losing two major stars, Ramtut III and Hugo "The Impaler" von Irongrad. They are able to adjust and continue being a strong contender for the Blood Bowl Championship[2]. 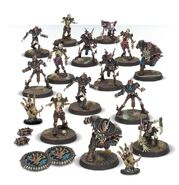 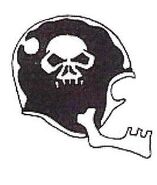