Barik Farblast, along with his illegal weapon, The Ballzooka, was a runner for The Grudge Bearers. He then left and is currently a free agent. The Ballzooka, invented by Farblast himself, is a device that launches a ball at high speeds and long distances, and has not been replicated successfully by other invenotrs and tinkerers[1].

Farblast started his Blood Bowl career as a runner for The Grudge Bearers in 2459. After two years as an unremarkable player, Farblast left the team for another year until returning with his creation: The Ballzooka[1].

From 2463 - 2469, Farblast and his creation brought in new fans and revenue for the Grudge Bearers, and helped to develop their throwing play, something Dwarf teams are not necessarily known for[1].

After the 69/69 season, Farblast left to become a free agent and currently lends himself to teams of his choosing[1].

Barik Farblast is the second heir to the Farblast & Sons Ordnance Solutions, who have made tremendous financial steps in weapons and artillery. His knowledge and experience as a weaponsmith allowed him to create The Ballzooka, something no one else has successfully replicated[1]. 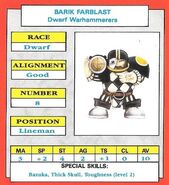 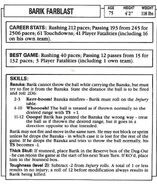 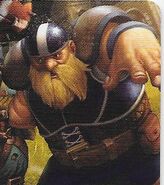 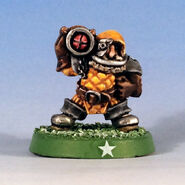